TL;DR: It’s possible to record a Skype call and your microphone as separate tracks in GarageBand, but the settings can be tricky. If you just want the settings, skip past this first section. Screenshots are at the bottom.

I’m playing around with the idea of starting up a podcast with some friends, and wanted to test some things out before I buy any new equipment.

One of the most common remote setups is to start a Skype call (or Zoom, Hangouts, etc), but to ask each person to record their own mic locally. After the call, everyone can send you their raw recordings, and you can import them into your DAW as separate tracks. That way you avoid any quality degradations, skips, etc that are normally introduced by Skype.

Even with everyone recording themselves, though, it’s still good to record the output from Skype as a backup, and to use as a guide when syncing all the tracks

. You may also want to use it if the people you’re working with aren’t tech-savvy enough to reliably record their mics. In either case, it’s best to have everyone on separate tracks, so you can apply EQ, compression, and other effects independently.

It’s also best to monitor your own mic during the conversation, in order to make sure the placement is good, etc. So, you need to hear both your mic and the Skype output in your headphones.

There are several tutorials out there, but none of them worked completely for me. I ended up getting it working after some trial-and-error, so here’s what I did.

The only software I needed to install was the latest Soundflower release.

I didn’t install the SoundflowerBed GUI app (which is retired), just the kernel module itself.

I also didn’t end up needing the LineIn app.

Note: I didn’t need to change the Input or Output under System Preferences > Sound. I’ve got those as a different mic and headphones (the ones that I use when not recording), and it doesn’t matter, because GarageBand and Skype have independent settings for inputs and outputs.

An easy way to test the Skype channel is to make a call to the echo123 account, which is a bot run by Skype to help users test audio settings. Make sure you’re connecting to that exact username, though, since it looks like there are a lot of phishing bots trying to impersonate it.

If it doesn’t work, then double-check all of the settings, reboot, and try again.

I noticed Skype sometimes reverting to Soundflower (2ch) when changing the system input/output, so make sure it’s set to 64ch.

I also noticed that GarageBand sometimes needs to be restarted to recognize changes in input sources, but it’s best to just restart the entire machine after the settings are correct.

Check the comments below, in case others have reported tweaks they needed to make to get it working for them. 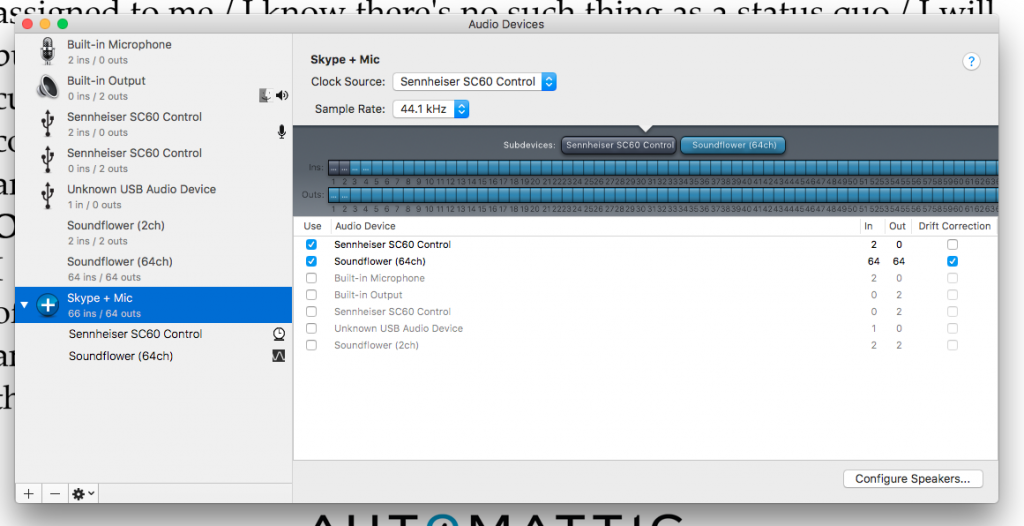 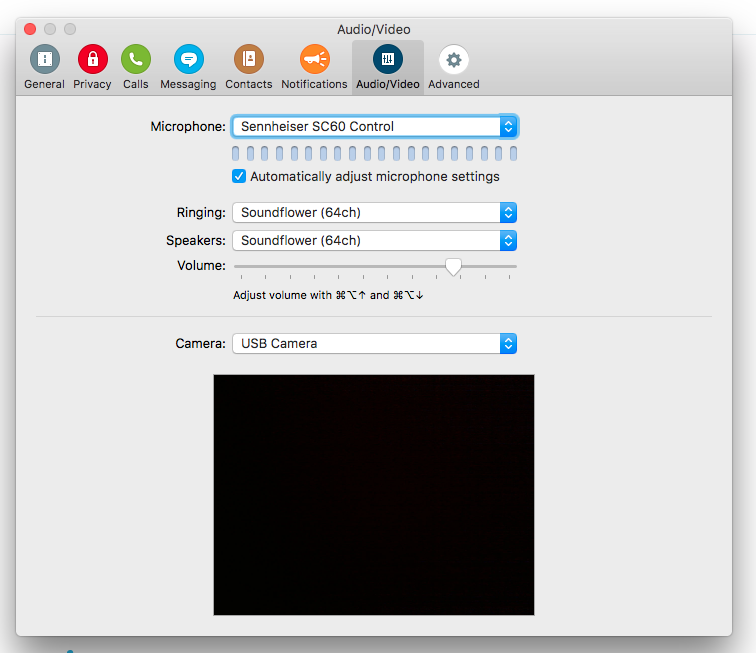